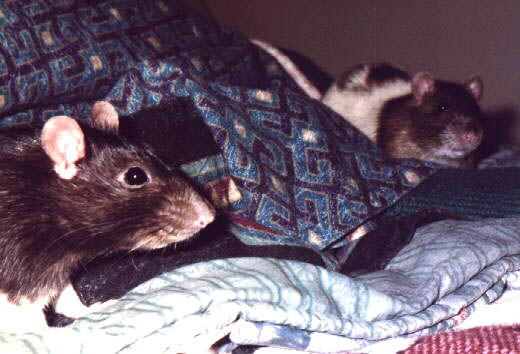 This is one of my all-time favorite rat stories:

Last night I was reading in bed and Mac and Laramie were on the bed with me. Mac paused near the edge of the mattress for a groom. All of a sudden Laramie darted out from under the blanket and pounced on Mac, knocking him off balance and sending him flying off the edge of the bed. I have this snapshot picture in my memory of a wide-eyed Mac in mid-air, mouth open in a squeak, already twisting his body so as to land on his feet. Apparently Laramie did not mean to do this as the incident seemed to upset him. When I moved to look over the edge of the bed for Mac, Laramie skittered to the side in a panicky motion (an unusual reaction to me moving). I swear the look on his face was, "I didn't mean it! I didn't mean it!" Mac was sitting on the floor were he thunked, so I picked him up onto the bed again and gave him some reassuring pets. Laramie slunk humbly over and gave Mac an apologetic grooming. All was well.

Mac was diagnosed with a fast-growing malignant tumor on November 11, 1998. In honor of his valor through the trials of surgery and in chasing the household cat, Copernicus Rex granted him knighthood.

Considering Mac's bravery, fortitude, patience, and cheerful endurance of his life as a sausage, I am more than pleased to grant him knighthood. He has been a fine example to all ratkind. Arise, Sir Mac!

I set my paw to this decree this eleventh day of November, 1998, at Pittsburgh, Pennsylvania

Copernicus Rex, King of All Rats and Supreme Ruler of the Universe.

On November 16, 1998 Mac passed peacefully on to the Rainbow Bridge.